Rain threatened throughout the day, but the race started on time. Smith started second, alongside Venturini Motorsports teammate Michael Self (No. 25 Sinclair Lubricants Toyota), who earned the General Tire Pole Award in qualifying on Saturday.

Self would lead the first ten laps but faced pressure from Smith the entire time. Eventually, Smith would dip to the inside and work his way by and drove off to a full straightaway advantage over the battle for second.

Smith could see the rain was coming as the race ran to its ultimate conclusion, and even hoped it would come sooner than later.

“Whenever you’re the leader and you can see rain coming and the race is past halfway you want it to hurry up and get there,” Smith said. “I knew as soon as it started raining it wasn’t going to stop so we needed to get out front and stay out front. That’s what we did. These Venturini Motorsports guys do a great job giving me racecars that can dominate these races. I drive them the same way I drive my late model cars and that’s where we were able to beat them all today. We had more drive off the corners and that’s what it took.” 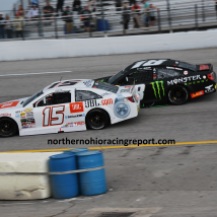 their first win,” Gibbs asked, “but I think we’re in the hunt for it. We’re getting a little tired of finishing second at this point. We just ran out of time before the rain came. I think we needed another ten laps and we could have had something for them at the end.”

Christian Eckes (No. 15 JBL Audio Toyota) finished third, Self was fourth, and Sam Mayer (No. 21 Chevy Accessories Chevrolet) was fifth.

The race was slowed a total of four times by caution flags, two for incidents and two for rain, one of which ultimately ended the race. The first incident happened on lap 30 involving Joe Graf, Jr. (No. 77 EAT SLEEP RACE Ford) and Hailie Deegan (No. 55 Toyota

Racing Development 40th Anniversary Toyota), both of whom made heavy contact with the foam blocks lining the outside wall in turn three. Graf would finish 17th and Deegan with finish 18th, and last, in her series debut.

The second incident of the day involved the championship leader going into the race Travis Braden (No. 27 MatrixCare/Consonus Health Care/Liberty Village Ford), who hit the blocks in turn one on lap 79. Braden would finish 13th, falling back to second in the standings 25 points behind Self.

There were two leaders on the day, Self from the pole and Smith, who led from lap 13 through the checkered at lap 152. The race was slowed four times for 23 laps and was ultimately shortened by 48 laps due to rain. Along with the race at Salem Speedway, it’s the second time in six races in 2019 that a race has been shortened by rain. The race took 59 minutes and 22 seconds and was completed at an average speed of 76.811 miles per hour.

The next event on the ARCA Menards Series schedule is the General Tire 150 at Charlotte Motor Speedway coming up on Thursday, May 23. Practice is set for 11:30 am ET, General Tire Pole Qualifying will follow at 5 pm ET, and the race will go green at 9 pm ET live on FS1. ARCA for Me members can access free live timing & scoring, live track updates, and live chat at ARCARacing.com. New users can register for free at ARCARacing.com/login. For ticket information call (800) 455-FANS or log on to CharlotteMotorSpeedway.com.